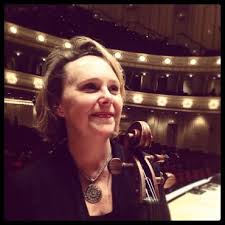 Ann Hendrickson Griffin (Cello) is a founding member of the Chicago Sinfonietta and in 1992 was appointed to the position of principal cello by Maestro Paul Freeman. As a member of the Sinfonietta, she has performed in many of the great concert halls of Europe, including Frankfurt, Stuttgart, Cologne, Leipzig, Zurich, Basel, Geneva, Bonn, Vienna, and the Canary Islands, also performing on two tours in the Kennedy Center in Washington, D.C. With the Sinfonietta, she has recorded over fourteen CDs and is a soloist on Epitaph and African Heritage Symphonic Series, Volume III.

As principal of the Chicago Jazz Philharmonic, Mrs. Griffin has performed at the Chicago Jazz Festival, recorded for its Collective Creativity CD and is featured on the Emmy Award-winning soundtrack and DVD for DuSable to Obama: Chicago’s Black Metropolis. She also served as principal cello of Joffrey Ballet Chicago 2003-2012, and has served as principal cello for the touring companies of the San Francisco Ballet, American Ballet Theater, and Ballet West. She has performed with the Civic Orchestra of Chicago, Illinois Chamber Symphony, Illinois Philharmonic, Chicago Opera Theater, Chicago Chamber Orchestra, Concertante di Chicago, Orchestra of Illinois, Elgin Symphony and Rockford Symphony. An active freelance musician, she also performs with Trio Caprice.

A native of Freeport Illinois, Mrs. Griffin completed her Bachelor of Music and Masters of Music in Cello Performance at Roosevelt University as a student of Karl Fruh. After winning the Farwell Scholarship of 1982 and at the invitation of Aaron Rosand, she studied at the Academic Internationale in France with Maurice Gendron and earn the Certificate du Stage. Further studies included coaching with Frank Miller, former principal cellist of the Chicago Symphony Orchestra.

Mrs. Griffin maintains a full teaching studio in Wheaton where she lives with her husband William.