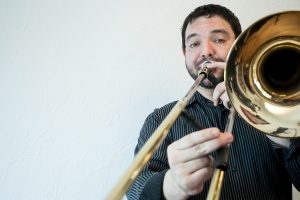 Dr. Andrew Rozsa (Trombone) is Lecturer in Trombone at College of DuPage and Illinois Wesleyan University. Previously, he was a member of Orchestra Iowa and the Dubuque Symphony Orchestra.

An active educator, Andrew has served on the faculty of McGill University, McGill Conservatory, and numerous high schools in the suburban Chicago area before joining the College of DuPage faculty.He continues to teach at the high school level as well, at Palatine High School in Palatine, IL.

As a composer, his works have been premiered by the Cleveland Chamber Symphony and the Albuquerque City Schools string program, among others.