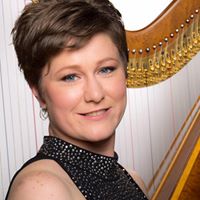 Julie Spring (Harp) Even before she entered this world, Julie Spring was destined for the harp. Her mother was quoted as saying that her children would learn to play the harp when Julie was still in the womb! So it was that Julie and her siblings all took lessons while growing up outside Chicago. Eventually, Julie’s path took her to Eastman School of Music and further to Roosevelt University’s Chicago College of Performing Arts, where she earned her Master’s Degree in Orchestral Studies.

Since that time, Julie has lived in numerous places and had the joy of playing with some of the world’s most prestigious orchestras, including holding the title of Principal Harp with the Toronto and Hartford Symphony Orchestras as well as the Civic Orchestra of Chicago. While Julie cherished the opportunities to play with these orchestras and playing as a guest with the Chicago Symphony, Lyric Opera Orchestra of Chicago and Grant Park Symphony, she finds a persistent calling to teach.

Outside of the standard private lesson studio in her home, Julie has taught as a sabbatical replacement at her alma mater, Eastman School of Music, as well as Harp faculty at Gordon College, Boston, and Concordia University, Chicago. While her own, grueling practice hours at the harp are treasured, she takes immense pride in the growth and accomplishments of her students.

In 2016, through common musical connections, she met and joined the Chicago Harp Quartet, “the quartet that put harp quartets on the map!” (Harp Column, 2018). With CHQ, Julie has toured domestically and internationally, and released “Dance Sketches,” the quartet’s sophomore album with 5 world premier works for harp quartet.

Julie’s harp-roadie-in-training is her son, Dax, who turned 7 this year. You can find them playing a duet on piano or harp just as easily as they discuss Transformers or Legos. Julie will warn you that her son’s blonde curls are deceptively angelic, though he is always willing to help move a bench or stand for musicians in need!